A SOLIDWORKS face mask with Surfacing 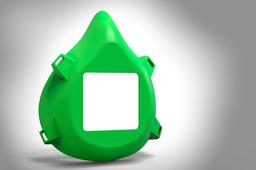 A request was posted in the Questions section asking that an STL file be converted to a proper CAD format. I completed the conversion, and received some requests for older versions of the file, or instructions on how to make it. SOLIDWORKS does not do backwards compatibility very well, so here are the steps I took to make this face mask.