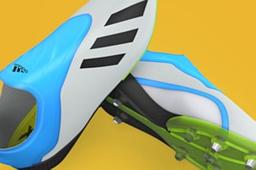 We are going to learn to model the Adidas X18+ soccer boot using surfacing techniques.
These are the cleats worn in 2018 by Luis Suarez and Mohamed Salah, among others.

The preferred software for this tutorial is Solidworks but any program with comparable surfacing techniques such as CATIA, Rhinoceros and Alias will work. It is an intermediate course because we are touching on advanced surfacing techniques but only develop a basic model of the shoe that can be developed much further.