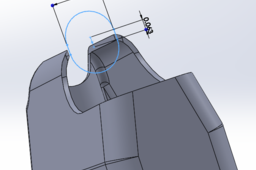 This tutorial will cover design of a slightly above basic firearms magazine. The concepts touched on here cover both simpler designs, and more complex.