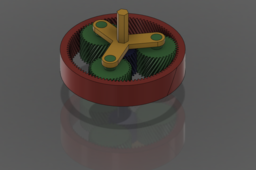 Helical Planetary gear can look complicated in designing but believe me it's as simple as designing normal gear .

Planetary gear seems to be very complicated while designing in any cad software like Fusion 360 , SolidWorks etc. But this tutorial is very easy way to make Planetary gear with wide range of gear ratio provided you should have basic knowledge about gear ratio ,gear physics .

This tutorial is for fusion 360 Beginners and intermediate .

Here you can learn some tricks while learning design .

for more check out my youtube channel :- Power Stroke (https://www.youtube.com/channel/UCysf0V1RMkwIHP2j8ixVQew)