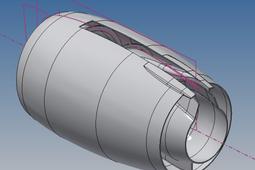 The derive command allows you to use models and assemblies as geometry and toolbodies within other part files. For 3D printing it's a perfect way to section complex parts so they can be printed in simpler pieces. Subsequent operations can be performed on the derived part without affecting the original source models and assemblies. Sketches, workplanes, and other work features may also be used from the source models.