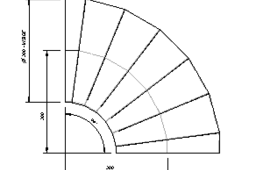 One type of industrial component I have been involved with the design and manufacture of is lobster-back bends. This type of duct bend is made up of segments cut from flat sheets or plates, rolled into cylindrical parts, then assembled. These can be light sheet-metal or manufactured from thick plate.

This quick tutorial is a supplement to the one I produced an outline of a method I have used modeling this type of component using Alibre Design. As this supplement concerns producing parts ready for manufacture and applies to whatever software you have used, that is not important as this short tutorial is to outline turning your modeled bend into the flat profile ready to be made into the completed bend.

In this modern world, the bend parts will be cut out using CNC laser, or CNC Plasma cutting machines. Sometimes we produce the nc programs ourselves or we are required to produce the correct files for the laser / plasma department to program and cut out. Making the program to cut out the parts starts normally from a 2D dxf file at a scale of 1 : 1. This is the first part of the process that has to be correct. If you produce this dxf incorrectly the finished parts will be useless. Producing this at the right scale, 1 : 1 is different with different 3D cad applications, other problems can be caused by you working in different drawing units. If you are not doing the program, talk to the person who is to make sure you produce the dxf as required. Having a large quantity of wrongly cut parts is not a good thing