Tutorial: How to create a (soccer) football like the never-before-seen Brazuca! 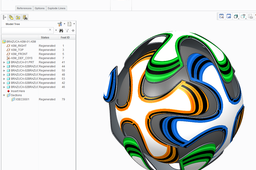 The Adidas Brazuca is the official match ball of the 2014 FIFA World Cup which will be held in Brazil. Interesting design which seems to have been built up of six panels, so why not create a CAD model to puzzle-out how this works!