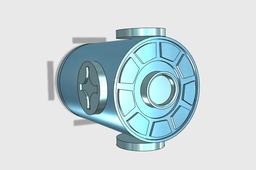 The aim of this practice is to build a printable model of the “HARMONY” laboratory (ISS Module), which means that it is advisable to avoid too much detail, i.e. the level of abstraction should be medium, not high.
The main steps are as follows:
1. Modeling the body: transform a cylinder by drawing the figure shown in step 1 using Sketch > Polyline, Three Point Arc, or Spline on the top base of the primitive. Finding the center of the base is done by Sketch > Project and clicking on it. The hole in the center is modeled by Construct > Extrude after drawing a circle. Before constructing the cylindrical hole by pushing in the center part of the top base, the top part of the cylinder can be cut by Construct > Subtract and after copying with Ctrl+C/ Ctrl+V, it can be placed in the bottom part of the cylinder. Its rotated by the Move/Rotate tool by 180° along the relevant axis. The opening on the bottom base is constructed by drawing a 2D profile with the appropriate shape and rotating it along the vertical axis using the Construct > Revolve tool by 360°.
2. Clone the figure on the upper surface: the figure must then be copied a specified number of times using the Circular Pattern.
3. Modeling an additional component: it is constructed by transforming a cylinder 3 mm high and 20 mm in diameter, drawing curves on its upper base using the method described in step 1.