How to Complete Your CAD Homework 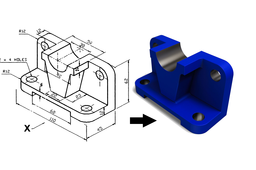 Models like this are common homework assignments for CAD students. Let's learn some skills to convert an isometric drawing into a 3D model.
SOLIDWORKS is used, but these skills apply to any 3D CAD program.